Google seems to be of two minds when it comes to social and referral data in Google Analytics. Up until the Channels report came out in 2013 (one of my fave milestones), social and non-social referrals were lumped together in one stew of data. Since the introduction of the Channels report we now have some reports that separate out social and non-social referrals but others that don’t, resulting in quite a bit of confusion as to which numbers to use when compiling social data, also analyzing the data is important, so using a web scraping tool can be helpful to get reliable data from your website.

Why Separate Them At All

Social traffic is characteristically fickle and a bit ADHD. For most sites, these visitors aren’t really interested in doing anything you want them to do (unless maybe you publish listicles and memes). They come in like a wrecking ball (sorry) and slingshot back to Facebook, Reddit, Google Plus (if they work for Google ?), or wherever.

Pure referral traffic (meaning non-social referral traffic) is much less uniform, according to a report published by Sirlinksalot. For my site, visitors from sites like searchengineland.com or moz.com tend to stick around longer than visitors from a site where I may be less known to their audience. For this reason, I always, without exception, analyze my social and non-social traffic separately.

And I think you should too.

Where I Think Google Stopped Short

As I mentioned, when Google gave us the Channels report (Acquisition > All Traffic > Channels), it separated out social and non-social referrals into the Social and Referral channels, respectively. (Yay!) Same with the Overview report under Acquisition. (High fives!) AND all of the Multi-Channel Funnels reports. (You’re on a roll, Googlers!)

But then somewhere along the line a decision was made to still classify social sites as referral in the Referrals and Source/Medium reports, instead of relabeling this traffic as social. (Boo!) This decision may have been with the intention of keeping these reports intact so that referral numbers didn’t precipitously drop off in 2013. But this inconsistency in classification of social sites is confusing to site owners and marketing strategists.

You can see, for example, in the report below that social sites are classified are referral, except for visits from links I’ve tagged with campaign parameters. 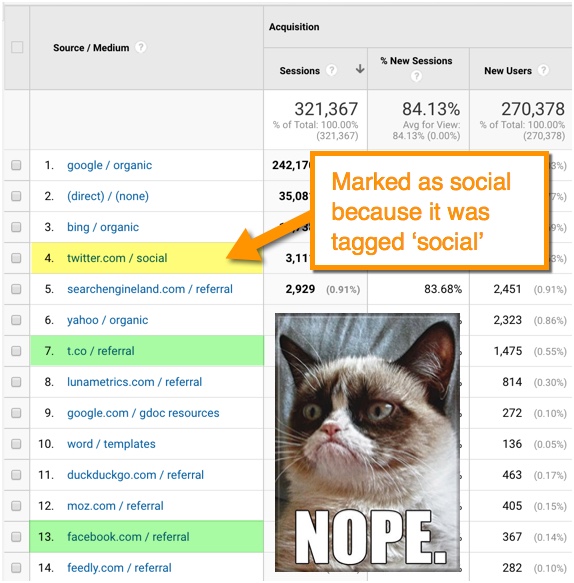 I have other issues with the Source/Medium report that I addressed in another post, but this issue of inconsistent classification is yet one more reason I’m really not a fan of this report. But I hope that by the end of the post I hope it will be clear why I clump the Referrals report onto the same data compost pile.

In my opinion, Google really should have seized the opportunity to separate out social and non-social referrals instead of leaving us with an odd kind of amalgam of referral reports. I’m not merely quibbling over pedantics here. This confusion is not without consequence. Social media strategists, in particular, are making decisions based on subtleties and inconsistencies in Google Analytics reports.

And when you couple these inconsistencies with the Hatfields-and-McCoys-level feuding between Google Analytics’ Acquisition and Multi-Channel Funnels reports — which causes conversion data to look very different between these report types — users are left trying to reconcile line-item differences that can have a potentially profound impact on strategic decisions.

My advice is threefold: